Innovations at the Nexus of Food, Energy and Water Systems

This project will build upon and expand a whole watershed model called Willamette Envision. The model is based on Envision, a modeling framework developed at Oregon State University (J. Bolte and colleagues). The diagram below illustrates the modeling process within Willamette Envision. Model inputs such as daily weather conditions and annual population growth, drive component models that operate within the modeling framework. These sub-models are called “plug-ins” because they run independently but share data with each other through the modeling framework. As a simulation runs, the plug-in models store and retrieve information from a shared database — output from one model becomes input for others as each steps through time. At the end of a run, spatial and tabular outputs summarize changes in the landscape, water, and human systems over a multi-decadal simulation. 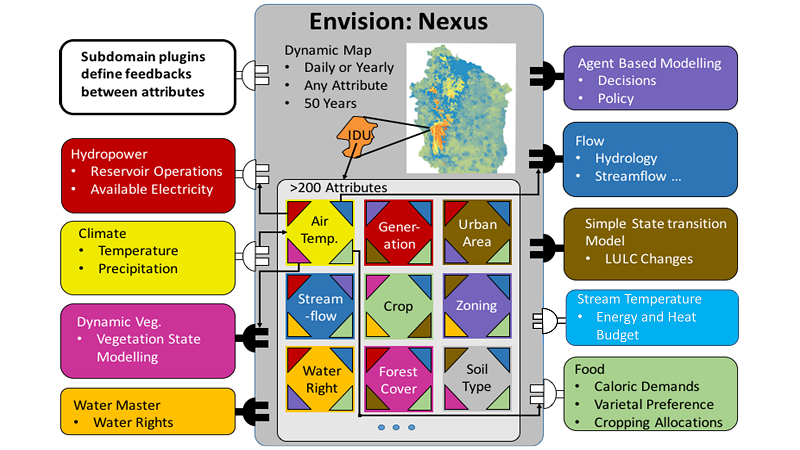 In the INFEWS model, we divide the Willamette basin into units that describe water drainage and land usage at progressively smaller scales. The largest subdivisions outlined in the map below, represent sub-basins for major tributaries of the Willamette River. Numerical computations are performed over much smaller parcels, roughly 1 acre sized,  that we call integrated decision units (IDUs). There are over 187,000 IDUs configured in the INFEWS model for the Willamette basin. At the scale of the map below IDUs are too small to discriminate. 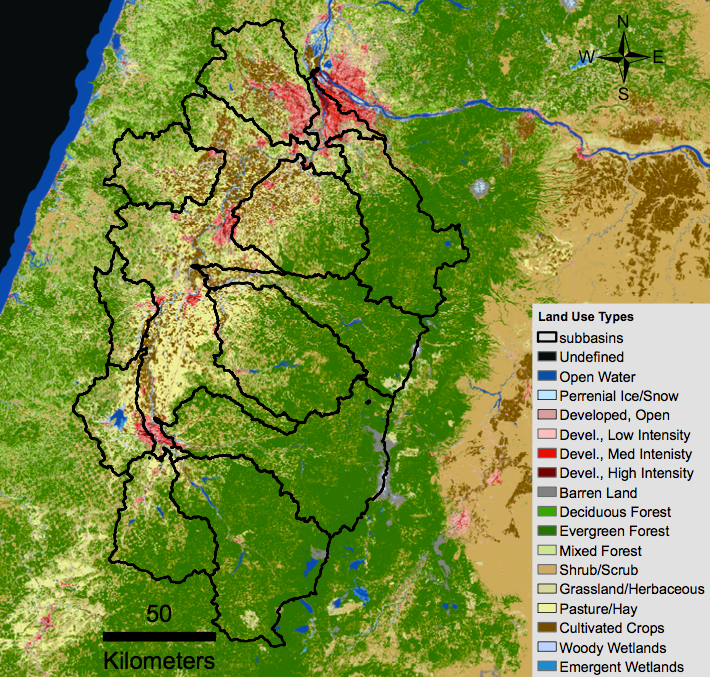 The next figure is a zoomed in display of the figure above to give you an idea of the IDU shape and size. This image shows IDUs, outlined in black, located at the north end of Fern Ridge Lake, west of Eugene. Red pixels demark the small town of Alvadore. Some IDUs bound more than one land use designation. The IDU boundary therefore is not a strict representation of vegetation class but rather a holistic representation that includes vegetation classification as well as how a land parcel is utilized. 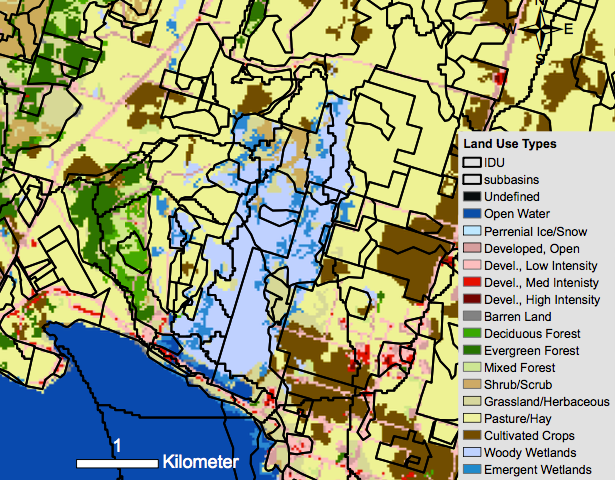 At each time step the INFEWS model reads daily climate data and distributes precipitation across the region at the IDU scale. Rain and meltwater from each IDU generate runoff that contributes to tributary water volume and temperature. Runoff feeds reservoirs and prompt policy decisions by dam operators and power authorities. Decisions at varying time scales are then applied based on physical constraints of the system and adherence to pre-defined policies. Policy decisions such as timing of reservoir water release feedback to physical parameters such as downstream temperature. Daily time steps enable policy decisions to simulate impacts on the physical system so that variations in physical constraints and policy decisions for different climate and policy scenarios can be modeled. Model output can be examined post-run through the INFEWS interface or, alternatively, a user can configure the model to output data in a format that can be imported into other applications such as Excel or Matlab.